Just before the new year started, NASA released the Columbia Crew Survival Investigation Report.  In the flurry of news around Obama’s upcoming inauguration (YEAH!!), this was buried.  This is a more detailed report on the loss of Space Shuttle Columbia which expands on their original report shortly after the disaster.  The original report’s conclusions were that a piece of insulating foam fell off the external fuel tank.  This piece of foam, about the size of a briefcase, collided with the leading edge of the left wing, creating a hole.  During reentry, this hole allowed hot gases to enter the wing and led to the eventual breakup of the Orbiter.

While this overview is now well known, the Columbia Crew Survival Investigation Report presents a much more detailed analysis of the step by step failure of Columbia.  It also outlines the likely fate of the crew.  This post is a summary of the 400 page report.

Before diving in, lets cover some basics about the Orbiter.  Structurally, the Orbiter has 3 main parts. The forebody, the midbody, and the aftbody.  The forebody is made up of an outer fuselage which contains the crew module, which is suspended within it by various braces and connections to the midbody.  The midbody is essentially the payload bay and payload bay doors.  Aft of the midbody is connected to the obviously named aftbody.  The aftbody contains the Space Shuttle Main Engines.

Both the forebody and the aft body also contain small thrusters.  These small rocket engines, called Reaction Control Systems, or RCS jets, are used for for in-space maneuvering.  These engines are located in the RCS pods in front of the crew module in the forebody, and in the bulges on both sides of the tail where it connects to the body of the orbiter.

When the orbiter is in the earth’s atmosphere, during launch, reentry and landing, it uses airplane-like aerodynamic controls.  On the trailing edge of the wings are elevons, which perform similar functions as the combination of ailerons and spoilers on a normal airplane.  Similarly, the trailing edge of the tail or vertical stabilizer has a rudder.  These surfaces are controlled via a hydraulics system.

Entry Interface (EI) is the beginning of the transition between space and the atmosphere, where both aerodynamic surfaces and RCS jets can control the shuttle.  Damage on left wing increases as hot gases grow the hole and decrease structural integrity of the wing.  Drag created by this damage causes the shuttle to twist (yaw) to the left of the direction of travel.   Initially, at least, the shuttle’s hydraulic system was able to compensate for the drag and keep the shuttle within the limits of its reentry path. 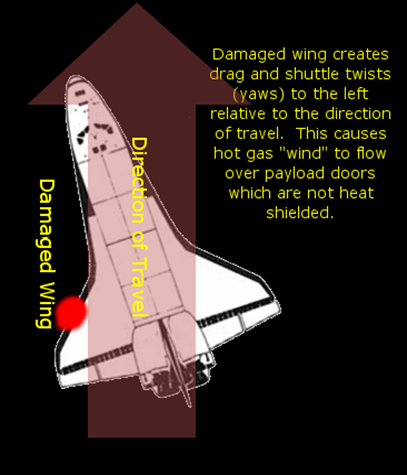 As time goes on, the drag continues to increase, as the hot gases begin to widen the hole in the left wing.  As a result, the left wing starts shedding debris and the condition gets worse.  The combination of the hydraulic systems and the RCS jets are able to keep the shuttle from veering outside the limits of its flight attitude.

The hot gases flowing into the wing eventually destroy the hydraulic systems which power the aerodynamic flight surfaces.  Unfortunately, there is not adequate redundancy in the system and the shuttle loses all hydraulic power.  As a result all of the RCS jets are firing at maximum, but it is not enough.  To make matters worse, when the hydraulic system fails, the control surfaces, now moving freely, gravitate to a nose-up position.  The shuttle pitches up, as well as continues increase its yaw to the left.  The simulated motion of the shuttle is shown in the figure below.

Upon recovery of the cockpit control panels, the switch positions were set in a way that indicated that the crew was aware of the hydraulic failure and was attempting restart procedures for the system.

The flow of hot gas flow generated by the friction of the atmosphere is still along the direction of travel, but the shuttle is now in a flat spin.    The left wing continues to deteriorate. Inside the shuttle, the spin increases the G forces beyond anything seen in previous shuttle flights. This creates a situation where the gas flow is no longer only impacting the heat protected surfaces of the shuttle.   Instead the gas flow travels along the right side and up over the payload doors, which is now exposed due to the yaw and pitch deviations.  The payload doors are not heat shielded and begin to heat up.

At 14:00:18, Mission Control receives the last frame of telemetry data.  At this point, the data contains data from the payload door sensors indicating that they were still intact.  During ground recovery of the shuttle debris field, the earliest parts of the shuttle found in significant amounts are from the left wing, and the payload bay doors.  This means that they were the first to fail, as significant debris from other parts of the shuttle were not found until further along in the debris field.

After this point, with no more telemetry data, the conclusions of the report are determined by analysis of video footage, position of debris along the trail of debris from west to east, calculated paths of descent, and the condition of the parts found. 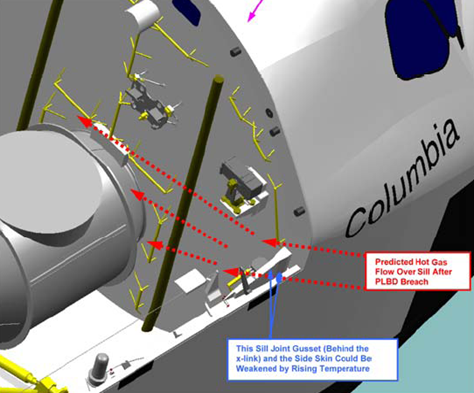 Separation of the Forebody

The combination of the G forces of the spin, the lack of structural stability provided by the payload doors, combined with the heating and weakening of the X-Link, cause the link to fail.  The forebody, including the crew module separated from the rest of the shuttle.  At this point, all power and lighting inside the crew module was lost. 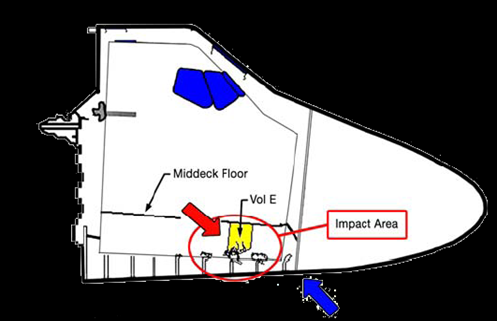 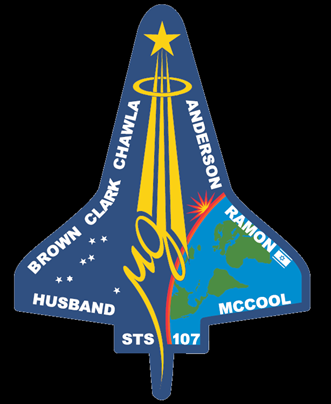 Once the crew was unconscious, they no longer braced themselves and their movement was constrained only by their seat restraint systems. The restraint systems lower body straps keep the legs and waist attached vertically to the seat along the Y axis.  The upper body straps are intended to keep the back restrained to the seatback along the X axis. These upper straps are connected to an inertial reel locking system.  This device operates similarly to the seatbelt locking mechanism in your car.  When the X axis acceleration exceeds a set limit, the reel with lock.  If you slam on the brakes in your car, you’ll experience a similar lock.

Upon recovery and analysis of the inertial reel lock mechanisms, it was found that they had not locked and remained open during the accident.  This failure to lock as expected cause the crew’s upper bodies to be unrestrained such that they could move left to right and forward and back while their lower bodies remained restrained to the seat.  With the extreme forces produce by the spinning and falling of the crew module, this combination resulted in severe internal blunt force trauma injuries to the crew.  It is estimated that while the crew was incapacitated and unconscious due to the decompression, it is likely that they continued to have circulatory activity until these injuries resulted in death.

Why did the seatbelt locking mechanism fail?

It turns out that this failure is, unfortunately, “by design”.  The locking mechanisms performed as they were designed.  These seats are modified military helicopter seats. The locking mechanism will lock if the X axis force exceeds a limit.  However, due to the nature of the breakup and rolling of the crew module, the fatal forces were in the Y and Z axes.  What’s heartbreaking is that this flaw was identified by the military and recent military craft were fitted with new seats to avoid this.  However, these changes were made after the construction of the shuttles and apparently NASA didn’t get the memo.

Why didn’t the crew have their pressure suits activated during reentry, especially once problems arose?

The shuttle was originally designed as a “shirt-sleeve” environment much like an airplane.  The shuttle control panels and switches were designed for the size of naked fingers.  It was only after the Challenger accident that the crews began wearing pressure suits during launch and reentry.  With the gloves on, it was difficult and cumbersome to operate these controls.  As a result, many crews kept their gloves off in order to better operate the controls.

Shuttle crew training focuses their attention on troubleshooting and problem solving.  It appears that the crew underestimated the gravity of the situation and was consumed with troubleshooting what appeared to be non-critical problems.  As a result, they never switched from problem solving mode into survival mode.

I would like to read this report, where can I find it?

The list of recent NASA reports can be found at:

The URL for the Columbia Crew Survival Report is:

This entry was posted in Sci-Tech. Bookmark the permalink.

One Response to Columbia: what exactly happened?